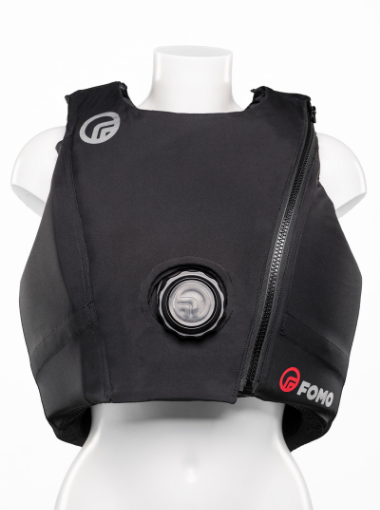 FOMO, the company behind the UK’s newest body protector FAZE that was launched earlier this year has just released the first findings in a study into body protection for the equestrian market.

FOMO was awarded an Innovate UK SMART Grant in October of 2019 and has spent the past 15 months completing a feasibility study on the named technologies working alongside thought leaders such as the University of Edinburgh to determine “life-like” test methods for assessing each technology.

The company was founded by Carmen Cummiskey, an experienced equestrian, and a graduate in Sports Engineering from the University of Strathclyde, Glasgow. Throughout her development of FAZE, Carmen was always of the belief that the best balance of performance and comfort would not be achieved with the use of a single technology and that the combined characteristics of complementary technological solutions would be needed to achieve a step change.

As with all safety products, ongoing technical evaluation is crucial and the team at FOMO recognised that three technologies had to be considered in this latest study – microcellular foams, air cushion (including inflation technology), and ‘exoskeleton’ (structurally engineered in suitable materials). The aim of the study was to provide an overall solution in which the individual technologies provided for performance and comfort exceeding the sum of their parts.

Working with Edinburgh University, FOMO developed a unique numerical modelling system that evaluates the stress on the rib cage and the body’s internal structures with and without various forms of protection.

Falls were evaluated at multiple speeds to assess how the various technologies work to protect the body and its internal structures. The first impact scenario aims to replicate the impact between the rider and a fixed wooden corner fence, and the second aims to replicate the impact between the horse and rider as a result of a rotational fall. Both impact scenarios took place at velocities of both 5 m/s and 9 m/s. This approximately corresponds to the minimum and maximum required speeds across levels.

The properties of the microcellular foams were taken from testing on the FOMO FAZE layering system. This foam is a unique, polyurethane foam manufactured and developed by FOMO with the support of Horizon2020 through the European Commission.

During a collision with a fence at 9m/s the stress on the rib was calculated to be 35% lower with FAZE’s DION foam protection than when hit with no protection. In addition to this, at 5m/s the internal stress on the rib cage was reduced by 47% with a FAZE protector.

The air system alone displayed a negative effect on the body with the pressure of the air inflation increasing the peak level stress on the ribs. The peak shown was higher than that without protection. However, there are multiple factors that come into play that can positively or negatively affect this value. Firstly, the rate of inflation of the jacket, the jacket’s shape, and whether the jacket inflates away from the body or in the path of least resistance. The research suggests that outward inflation jackets, when worn with a foam protector underneath would be the best option should an air jacket be chosen to be worn.

The team at FOMO is excited by the new testing process which allows repeatable testing of multiple impact scenarios. The research is already being implemented to the design process and the team is looking toward BETA International which has now been moved to later in 2021 to initially show the outputs from the project to both trade and public.