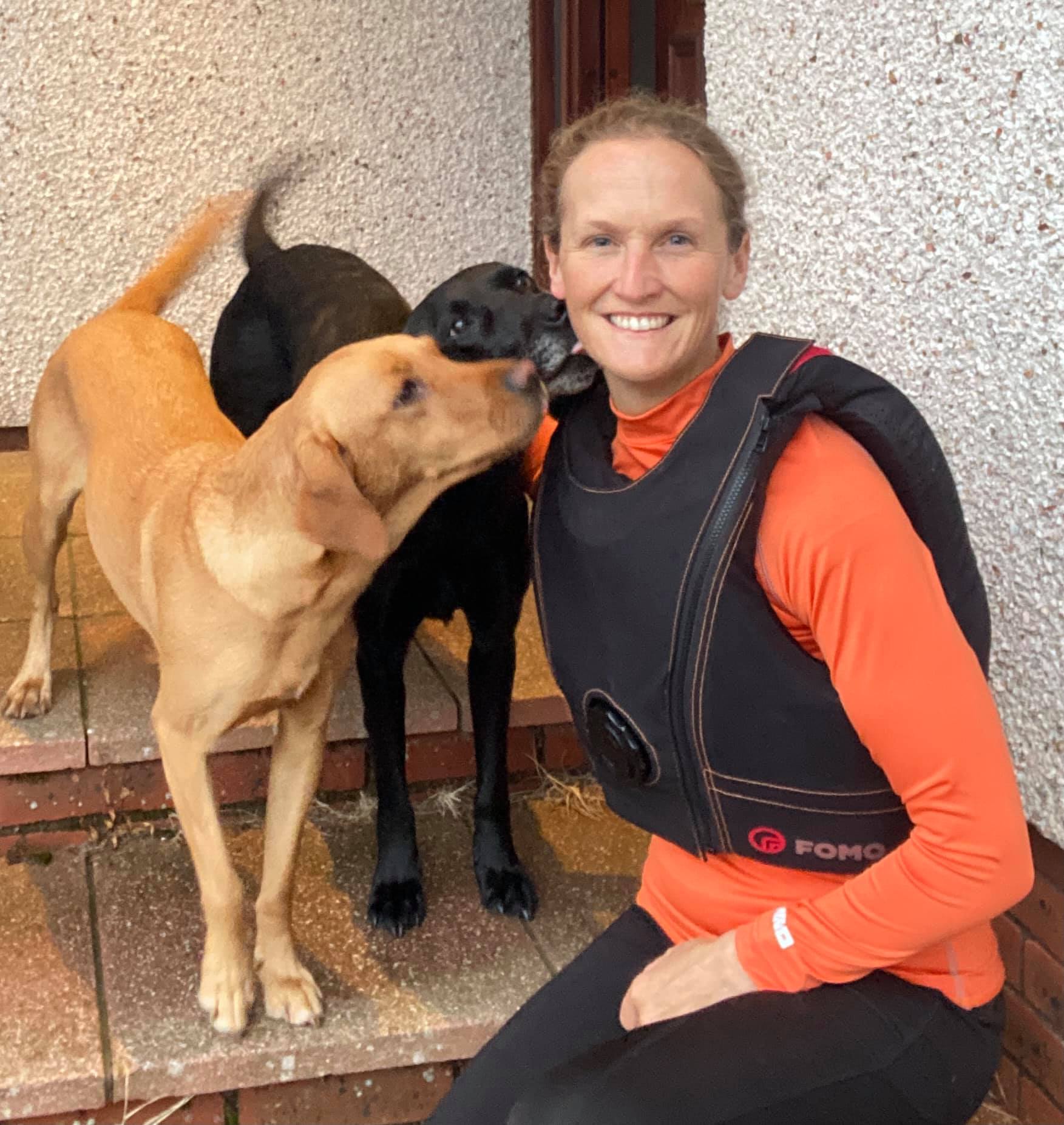 I would love to be considered to join the team as a FOMO Ambassador. As someone who is a supporter of the advancement of safety and the development of innovative, useful products, I am a fan of the FAZE as it has been developed with some important safety considerations without compromising on comfort which, in my opinion, makes it the best BP on the market. I was impressed that in the design process, the zip area on a typical BP’s had been considered as an area of weakness, so the design to offset the zip to protect the sternum had been included in the development of the FAZE. For me, this showed a massive demonstration in the consideration of safety. I have found the FOMO FAZE to be incredibly comfortable and have already recommended it to many riders.

I have been lucky enough to be involved with horses all my life. I started out competing at affiliated show jumping competitions on ponies and was fortunate to represent my country on home-produced ponies several times. After growing up and having to concentrate on my career as a Registered Veterinary Nurse I gave up riding for several years to obtain my qualifications. Towards the end of this non-horse period, I worked in Australia and happened upon a show jumping yard where I picked it all up again. I rode several super horses and picked up some high placings at large shows such as the Royal Dubbo Horse Show and many others around New South Wales. I returned to the UK and moved to Edinburgh to start working at the Vet School. I met my non-horsey husband John, and at this same time, a friend eventually convinced me to give eventing a try. That was just over a decade ago and I have been hooked ever since! I have produced my own horse up to British Eventing Novice and was placed consistently in the top 10 with him. We had won at horse trials, qualified for grassroots eventing championships and riding club team championships, but it was all halted after I was a passenger in a serious car crash in June 2014.  I spent three weeks in high dependency with abdominal drains, chest drain and underwent spinal surgery. I had to take time to rebuild myself so all riding was put on hold and there was a possibility I may not ride again but I was determined to get back in the saddle. This drive helped me stay positive and keep pushing forwards with the plan to get on board and go hacking. My horse at the time was super quirky so I was loaned a superstar older horse Classy Touch to help me. Classy didn’t just get me hacking again, he surpassed all expectations and took me around several three-day events at (old) 1* and we obtained top ten placings at BE Intermediate too which was fantastic for a 22yo horse. He was retired from eventing in 2017 and continued to have fun at Trec, dressage, and was a natural at side-saddle. His most recent outing was in 2018 where we were placed in the large Side Saddle classes at the Royal Highland Show (RHS). Shortly after the RHS I sadly found he had died in the field from a massive heart attack. It was a big shock and broke my heart. I will be forever grateful for having such a wonderful horse in my life. Classy gave me the ability to ride again, and the drive to enjoy every day as it comes. I love my hobby and the horse’s happiness and welfare are my number one priority (sorry John!). The horses live on our smallholding in the Scottish Borders shared with my husband’s Hebridean Sheep. They love a varied life and so alongside national and international horse trials, I take part in other spheres such as Trec and showing. I also take my Miniature Shetlands running with me to keep their weight off, keep them and myself fit too! It is a happy gang and another important part is the Labradors – aka The Eventadors – who are a constant source of support (and licks). In my full-time role at Edinburgh University’s Vet School, I lead the clinical skills department teaching practical skills to veterinary students; this involves everything from basic animal handling to performing clinical tasks. I also lead and train examiners for clinical practical exams and run a teaching qualification programme. The Eventadors join me daily in these classes and play an important part in the training of the next generation of veterinary Surgeons! 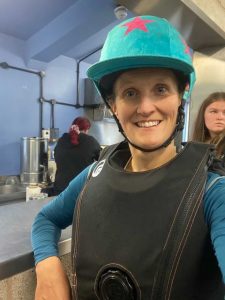 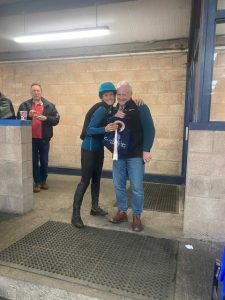 My horses are all chestnut! Not by choice but they do seem to have ended up that way! Here is a bit about them all:

I had the pleasure of riding Kenny while his owner was expecting her first baby, and he settled into the team life really well. He can be a bit of a drama queen, but we love him and earlier this year he joined the team permanently. Kenny has competed at 2* with me including a fabulous ride around the Blair CCI2* long this season, ending the week on a clear showjumping round. While we had a blip on the cross country I can take so many positives (it was rider error!) and I am so excited about what the next season will bring together. My aim for 2022 is to step up to 3*/Intermediate and possibly in the future maybe achieve an ambition of competing abroad!

I bought Dwina in 2017. I saw her advertised and loved her and spent a week convincing my husband we had room in the stables for one more! She had recovered from a suspensory injury and was looking for a forever home. She is a wonderful mare and I competed at CCI2* and Intermediate with her last run being at Belsay in the Intermediate in 2019. My aim for 2022 really is to see how she feels. She was unable to hold a foal and owes me nothing so there is no pressure, but I would love to pop round an event one day again however just seeing her trot up the field for breakfast gives me so much joy, I’m happy as long as she is happy. Dwina and I have also completed an endurance ride, taken part in lots of Trec competitions and, generally, we have fun and enjoy everything we do (except being rugged up, Dwina doesn’t like this so much!)

I’ve known Larry since he was 3yo as I originally bought him to the event. It turned out he was a bit unlucky and has spent many years in and out of the hospital for a variety of reasons! It was due to Larry that I met my best friend Sarah who now part-owns him and enjoys him as a happy hacker, although this year he seems to be feeling incredibly well and I’ve tried to event him! He has completed two BE80 and 90’s and if he feels well again next year we might try to do a few more! He can also be seen with Sarah at Trec competitions and any other outings we take him on. His main role has been partnering my horses to the gallops to keep them fit (he gallops fast!) so you could say he is the fittest happy hacker around!

Live each and every day to the full is how I view my life. I am so lucky to be able to do what I do, I enjoy my job, my hobby and have the support of a wonderful husband and friends. When I go out with the horses I want to always be improving, and while I know I will always be an amateur rider, I have a professional approach to this and continually strive to do better. I am in awe of the amazing athletes we have in many different sports. I love following athletics as well as equestrianism and my hero’s include John Whittaker, Frankie Sloothaak, Lucinda Green, and Princess Anne, (Princess Anne rode a horse my god mother produced – Goodwill!), Carl Hester, Charlotte Dujardin, and many others in equestrian plus Liz McColgan, Paula Radcliffe, Katarina JT, Roger Black, Jessica Ennis Hill, and many others. One of the most inspiring people I follow is Suzanna Hext, who had life changing injuries from a fall off a young horse in 2012. She became a Para dressage rider, and went on to be European champion in 2017, and then moved to para swimming where she has just become a Paralympian competing in Tokyo despite her body trying to fail on her. Her journey is inspiring, and her hard work and dedication are seen in her posts on social media and her successes in sport. I have the most incredible support from my husband, family, and friends. In my spare time, I try to catch up with them, I like a quiet dinner out and a good catch up when I can, it’s a great way to unwind and something that has been missing a bit over the last year due to the pandemic…. that and dog walking holidays exploring the British Isles! Hopefully, they can pick up again soon!