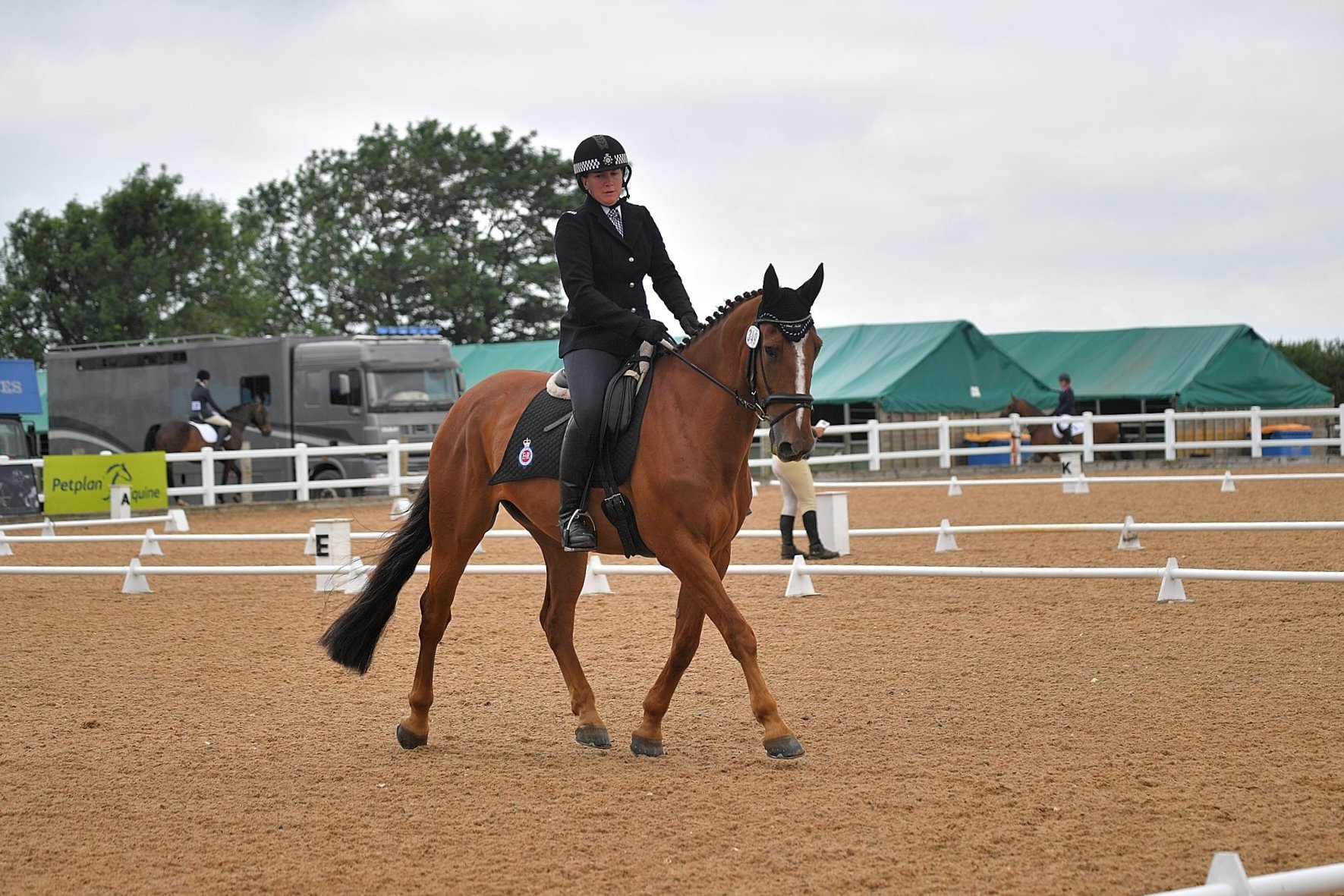 Posted at 20:19h in Uncategorized by Sarah 0 Comments
0 Likes
Share
So it’s been an interesting Summer!
Trusty is really moving up now and I’m so proud of what we are both achieving. I’ve moved to a wonderful new yard with some fantastic people who have really pushed me so far this year – it’s been great to have that support. We competed at Forces Equine Games in July in dressage and show jumping. Trusty pulled 5th and 3rd out of the bag in the Prelim and Novice tests which I was so pleased with. He then did his first speed class over the 1m05 ride and run indoors where he coped really well. He then jumped in the 95cm and 105cm rounds where we had a bit of 8 fault-itis but the course was big and he jumped out of his skin which I was so happy with.
Our next big outing was a return visit to Hickstead Royal International Horse Show for the Riding Club team event with Forces Equine. This was Trusty’s second visit to the show and he moved up to the 95cm class. As he is eligible for any of the heights we had moved around a little to fit in with the team dynamics as we had a few last-minute pull-outs. Again, he was super but finding 95cm a little small to keep his attention so I learnt I should have kept him at 105cm but that’s something we can put forward for next year. 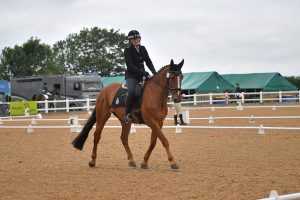 At home, he has been schooling over 1m15-1m20 fences and I am finding that this is far more worthwhile with him as he is actually jumping and thinking about where his feet are. I also know though that there is a big difference between jumping 3 or 4 big fences strung together at home and jumping a full course of them so we have also been going out to course hire to build the confidence not only for the horse but for me at that level as I have never ventured over a metre!
At the start of August, I made a last-minute decision to enter the arena eventing at Gatcombe Festival of British Eventing. This was my first trip here and we decided to put Trusty in the 100 section. He felt great in the warm-up and started off really well in the class once he’d realised he was a) really jumping on grass for the first time and b) got to jump cross country jumps once he’d jumped a few show jumps! 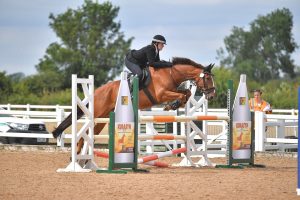 Sadly disaster struck for us over a coloured arrowhead coming out from the hedge line. Trusty had a glance off at first presentation and then when he came again he seemed to stop mid-air and fell on the fence, firing me out over his head and the other side of the fence. I was luckily not injured too badly, just a few usual bruises but that was thanks to wearing my back protector and air jacket – without these I would have been more seriously injured due to the way I fell. Unfortunately, Trusty did not come off so favourably.
I led him out of the ring and whilst standing speaking to a friend of mine that had been watching, he began to bleed quite profusely from a large cut to his heel on the front leg. Luckily, being at such a big show I had a fantastic vet on call at the ring from Abbey Vets who also happened to be a friend of mine from my Forces Equine side of things. She sprang into action to treat a very large overreach injury and Trusty ended up sporting 12 staples in his heel. From the pro photos, it appears that Trusty stood on his front foot with his back, pinning his leg to the ground with the stud and ripping through his foot as he tried to take off.
As you can imagine, I felt awful as I had made a big mistake of leaving his overreach boots off which I religiously put on for cross country as a result of putting studs in. I had completely forgotten these as I was thinking more of the showjumping I was doing as well where I would not use overreach boots usually. I have hugely learnt my lesson and will never forget these again when jumping in studs – I’d much rather roll a show jump than deal with an injury like that again.
This injury set us back immensely as it took quite a long time to heal and I had a holiday booked for September so it has meant we lost out competing in August eventing and then also lost September and the Winter Forces Equine Games in October due to lack of fitness. I have been very lucky though as the injury missed anything vital and Trusty has not had a lame day out of it – this is mainly down to the swift and fantastic vet work I got at Gatcombe. After 3 weeks box rest he was back out in the field and starting fitness building work.
We are back on the job again now though and he feels really good – he had a first proper jump the other day and was great so I am tentatively working towards one last 90 run at Aston Le Walls at the end of October. I wanted to just move him back to 90 so that this was a confident run to end the season and then we will work on our showjumping and dressage over the Winter. He will go cross country schooling the weekend before Aston to give him a bit more experience and then we both know Aston well so it’s a great place to finish the season.
I am hoping to finally make that big leap and affiliate with British Show Jumping this Winter as I feel that Trusty has got the capability to at least make 1m10 level. It’s just about building both of our confidence but I am lucky enough to have some very knowledgeable and supportive people around me now who are pushing me in all the right directions. Wouldn’t it be great to make Novice level by the end of next year, or perhaps bigger?
Jenna